I have been seriously considering updating the “tagline” of my blog to the below:

“Random thoughts, ramblings and rants of a late twenties gal – pushing her way through adulthood with chronic illness.” I mean, I have the mental too but oh the physical illness….

Yes, I have been not feeling well again, which is something that I say all too often and I apologize. Thank you for hanging in there with me! So life lately has been a bit crazy. I have had some severe pain and by severe, I mean I felt like someone threw a cinder block into my back and pelvis… repeatedly.

I have accepted my heating pad as new limb? Or perhaps I have a new – slightly unhealthy dependency on it now haha. So… basically have been living on it for legit about 2 weeks now. You see this pain was a bit familiar to some older endometriosis symptoms from before my surgery – but I tried to keep cool. Popping Aleve like bottles of champagne and as much fun as that sounds, it did not help me. I was forced after…oh about a week of suffering that I should probably get this mysterious pain checked out – so off to an urgent care I went.

I knew what I was going to hear – because of my sneaky suspicion of this being reproductive versus God who knows what. But the fine young doctor checked my spine due to the back pain – that did not let up while sitting, standing, levitating or flying my broom and of course skeletal wise, I checked out. He then moved on to poking my belly – which is always fun. I winced as he jabbed me in my left ovary/pelvic region and after a random series of questioning of if I had a history of kidney stones or kidney issues, I did not – well maybe a stone. Anyway, from what I understand if it were passing of a kidney stone, that would go along with my newly informed symptom of blood in my urine… I should be on the floor crying and or dying.

I was not at that point.

SO  Mr. Dr Man agreed, it sounded more pelvic and if my pain did not go away with my new fancy muscle relaxers and high dose ibuprofen – he suggested that I get an ultrasound. YAY.

I managed to get home, throw these (hopefully) magical pills and miraculously recover.

That did not happen either :). I called up my gyne and shared my lovely story, and after my rambles – everyone was still on the same page as ultrasound – so I made a sexy date with them that Friday. First thing in the morning. Nothing like an internal ultrasound to go along with your danish in the morning.

There was a cyst, but apparently it was not of “too much” concern as it was not that large. Well, lady doc went to the drawing board and suggested 4 plans of attack:

My primary stated that she would have went the ultrasound direction as well, but since that was out of the way and now my new urine sample showed increased blood…she was zoning in on a kidney stone. Which at this point, even I was considering it. I was passed along that evening to complete a CT scan. I would like to note that I was not able to eat from the time that I left my primary appointment at 2 until 7 that evening #hangry.

As I continued my love affair with the heating pad and pills that evening, I was still suffering and at this point – in tears. It had officially been 2 weeks now and without answers and continued pain – I broke down a bit. Oh yes, throw in that fear of returning endo with vengeance. I anxiously waited for my results, which I knew would not be until the following day considering the time, I mean…. doc offices just do not like those kind of evening hours… right!?

The CT scan was clear and the blood work that my primary took showed normal kidney function- so that is awesome. But still without a true answer – I took that Friday off from work. I was sad, mad and honestly tired of running around – so I slept like a champ. My primary is now thinking that it is indeed the endometriosis and that if this pain does not subside, which I am happy to say that it has improved a little that I needed to go back to my gyne. 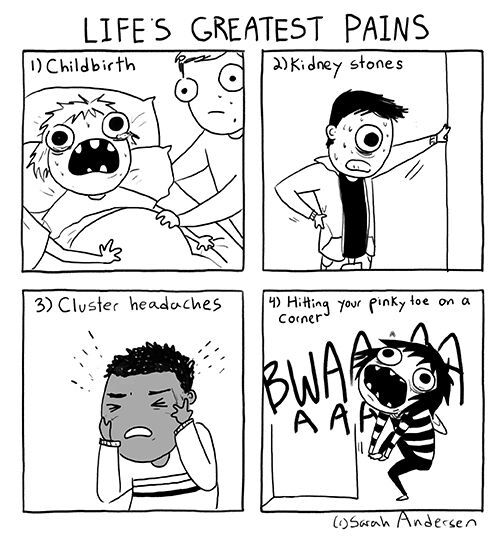 Comic Sarah Andersen gets it 🙂 #painhumor

We all know my fears here, I have put them out in the world many times now. It was like my anxiety ridden mind – watched what little chance that I had at “natural” fertility shrink before my eyes. I mean there is still a chance but the worry looms…..and generalized anxiety gal here. JUMPING to worst case scenario 🙂

I am playing the waiting game. I am hoping this all goes away, but we are going on week 3 here and while better – its still there.

So this ends my Goose Chase Tale (tail?) and I hope to report back with good news soon.

How are all of you doing? Have you had similar goose chase stories? How about fellow endosisters?